Our One and Only Planet, What Can We Expect from COP15 (Part 1)

(This article was published in the print version of Liberia’s Daily Observer on Thursday, December 10, 2009.)

While many people in developed nations are aware of the UN climate change conference COP15 being held in Copenhagen from December 7 through 18; however, what they might not be aware of is how important this conference is to the people of developing nations like Liberia. The people living in some of the poorest regions on the earth are already experiencing the devastating effects of climate change. This mere fact proves that the impacts of human activities in one part of the world can greatly alter the lives and livelihoods in another part of the world. It is clear that based on the evidence that global warming is a worldwide concern that is not obstructed by borders or boundaries. 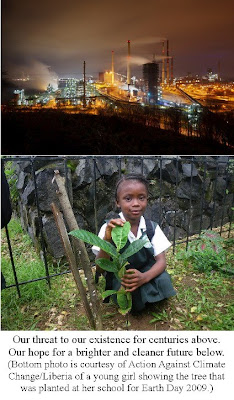 One of the many challenges of these talks is to sensitize the leaders and people of the industrialized nations that they carry the greatest responsibility for the shift in temperatures around the world from their manufacturing plants emitting high amounts of carbon dioxide into the air to the high energy demands for transportation and other modern day conveniences creating an over consumption of fossil fuels. The people of developing nations cannot afford to be no longer heard since they are witnesses to major environmental shifts such as extreme droughts and flooding that have weaken their seasonal crop production and caused many to flee their homes being forced to rely on international aid programs for food assistance.

This conference is bringing together approximately 34,000 delegates of scientists, environmentalists, journalists, grassroots organizations and many other people representing 192 countries to address this critical escalating problem. Also, 100 heads of states or government including US President Barack Obama, China’s Premier Wen Jiabao, Indian Prime Minister Manmohan Singh, Brazil’s President Luiz Inacio Lula da Silva and leaders of the European Union (EU) who are set to attend a climax summit on December 18 (Curtain Set to Rise on Climate Change). According to Yvo de Boer, executive secretary of the United Nations Framework Convention on Climate Change (UNFCCC), this conference is calling for an international agreement of the following four essentials (von Bülow, March 2009):

1. How much are the industrialized countries willing to reduce their emissions of greenhouse gases such as carbon dioxide (CO2)?

2. How much are major developing countries such as China and India willing to do to limit the growth of their emissions?

3. How is the help needed by developing countries to engage in reducing their emissions and adapting to the impacts of climate change going to be financed?

4. How is that money going to be managed?

This conference is addressing a problem that will not correct itself. Clearly every human has played a part in contributing to the problem of global warming no matter how small or large. However, for the people of developing nations their contribution is negligible compared to the people of developed nations. There is no dispute that industrialized nations like the U.S. use more than their share of the world’s supply of non-renewable natural resources like fossil fuels, and essential life sustaining sources like fresh water.

Since the Industrial Revolution in the 18th century, manufacturing companies have been a major contributor to air, soil and water pollution. Also, commercial farming and urban development have stripped away many forests, natural habitats for other living creatures, and precious top soil for growing food and other plant life. With this ongoing advancement of technology and the expansion of human settlements several animal and plant species have gone extinct forever, natural protective barriers such as the mangrove swamps have been destroyed that can no longer hold back the surging sea water, and large sections of land that were cleared of trees for agriculture purposes are being threatened by desertification. These significant changes in our environment can be seen and felt all over the world.

Based on these destructive human generated activities, it would seem as if people feel that another planet is waiting for us once we have destroyed this one. Who knows maybe some people believe that since scientists have discovered how to clone other living things like Dolly the sheep that they are in the process of cloning another earth.

Strangely, some theorists have gone so far to claim that Mars was the Garden of Eden and Noah’s Ark transported us to settle on earth when the “red planet” could no longer support life. As crazy as this notion sounds, it sure seems that humans have taken for granted that this one planet that we all call home is also a living being that can be destroyed and even die. Now in the 21st century as the fate of the earth is unknown, scientists and theorists are debating on whether human colonies can be supported on Mars if the earth becomes uninhabitable because we lost the battle to global warming (Moore).

Regardless of these theories, the planet earth has its own history and there have been certain occurrences that should caution us in being over-confident or arrogant in believing that we humans cannot cause our own extinction.

First one comes from a scientific perspective regarding the extinction of the greatest creatures that once walked the earth, the dinosaurs. For decades archeologists have been uncovering the fossils and remains of these gentle or fierce beasts. They have examined their bones and reconstructed them into skeletal frames to learn more on how they once lived and what may have been the cause to their destruction as a species. There is more than one theory that exists about their untimely death, and yet many of us stand in awe as we look up at these mighty beasts displayed in museum exhibits around the world wondering how such creatures ever existed.

The second one comes from a religious perspective. God one day decided to purge the earth of all the living creatures, because they had become corrupt and violent. He commanded Noah in building an Ark that would safely carry his family and two of each animal living on the earth. That fateful day came where for 40 days and nights the great rains flooded the entire earth wiping out every living thing. When the rain finally stopped it was a new dawn for life of all the species that had been finding refuge on the ark (Genesis 6:1 to 9:17).

Granted, God made convent with Noah to not flood the earth again; however, who knows God might have the prerogative to have a change of heart. There is no dispute that human corruption and violence continues to be our destiny. If God decides to purge the earth again maybe this time humans will not be selected to build the next ark or even be included as one of its passengers.

Of all living creatures, humans are the most destructive and violent beings on this planet. For several centuries now, we have waged war over religious differences, acquisition of large tracts of land through colonization, and also of natural resources and minerals such as oil, diamonds and gold. In this century and beyond wars could be waged over limited supplies of food and fresh drinking water, because we failed as the collective human society to ensure proper and equitable distribution of these essentials to life.

In fact on Tuesday, December 8, the Associated Press reported that “the U.N.’s weather agency boosted the sense of urgency surrounding the conference with data showing this decade is on track to be the hottest since records began in 1850, with 2009 the fifth-warmest year ever. The second warmest decade was the 1990s.” Also, from scientific analysis of tree rings and retreating glaciers conducted by the U.S. National Academy of Sciences they cited that “the last few decades are the warmest period in at least 400 years and probably 1,000 years” based on the evidence they found in their research (Heilprin).

Therefore, the Copenhagen conference is an important convergence of people from many nations and backgrounds to find equitable solutions for this global concern. According to Connie Hedegaard, Danish Minister for Climate and Energy and incoming COP15 President there must be an accord reached by the delegates in effort to “seal the deal” among the nations represented. She views this conference as “window of opportunity” since the momentum is at its highest point ever. Otherwise she commented that “if the whole world comes to Copenhagen and leaves without making the needed political agreement, then I think it’s a failure that is not just about climate. Then it’s the whole global democratic system not being able to deliver results in one of the defining challenges of our century. And that is and should not be a possibility. It’s not an option (von Bülow, October 2009).”

As the world waits for the results from COP 15, we must take a moment to realize that we are fighting for our future existence. We must realize that the earth is a miracle that was created to be our one and only home, which we have been entrusted with its care and preservation of its life-giving and life-sustaining resources. No matter our culture, religious belief, experience or education, we are united as one family and like any individual household we must learn the process of sharing and conserving the earth’s resources to ensure peace and harmony. If we can practice this simple rule from the individual household to our global home then this would be the greatest achievement ever accomplished in human history.