Your compassion and generosity filled our new learning center with happiness. On October 29, 2016, we held the grand opening of our new Uniting Distant Stars (UDS) Learning Center in Liberia. During this program, your gift of school supplies was delivered to the remaining children, who are the grateful recipients of your service. This post highlights the fun-filled day from the words of Kelvin Fomba, UDS Co-Founder & Country Director:
First of all, we’d like to say thanks to the Almighty, the entire UDS team, and support team in USA and around the world for making this program a success. The program was so great, wonderful and exciting! The hall of our learning center was so congested, some people overflowed outside to the courtyard. We had about 450 kids, 150 parents, and about 30 special guests, including UDS Liberian team in Liberia attending the program.

The miraculous part was this: all the kids were able to receive their school supplies individually along with their refreshments of popcorn and KoolAid.  Rev. Samuel Enders, CEO & Founder of African Dream Academy, served as the keynote speaker of the program. He was so impressed about the development at the new learning center and the large population of kids filling the great hall. He also pledged $10,000 Liberian Dollars (equivalent to $120 USD) to be collected nest week.

Listen to the students chat before the program starts.

This is the largest program UDS has ever had. The kids performed numerous dramas, songs, and jokes that had everyone clapping and laughing. Also thanks, praises, prayers were shared from the kids, youth, parents, guests, the schools’ administration to You and all our UDS family in Liberia, USA, and around the world.

We end this post by sharing this happy day with all of you. Rev. Enders led the children in singing “If Are You Happy & You Know It,” and we invite you to sing along as you play this video.

Our heartfelt thanks to you for bringing happiness and joy to young students in Liberia!!! 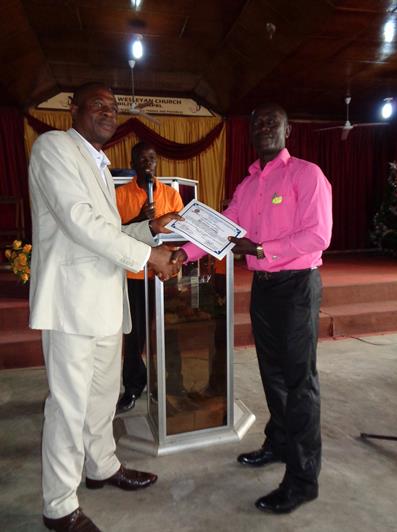 Dear Star Supporter,
Things, thanks to YOU, are only headed one direction: upward!
Everyday, we come closer and closer to reaching our $7,000 goal for the 2016 Annual School Supplies Drive. Just this week, an additional $401 was raised toward this very important cause! That means we’re at $1,386, which is about 20% of our total goal… ✩​And we’re only headed upward!✩​
We, and hundreds of youth on the other side of the globe, would like to express our sincerest gratitude for your unfailing generosity. Your contributions are literally changing the world. By providing bright young minds with the means to leverage their brilliance and problem-solving abilities, you are making a real difference.
With the funds raised from this campaign, UDS will provide 700 young students attending City of Joy, Rogma International, and Russ Wood Schools with much needed school supplies.
In recent, exciting news, UDS leader, Kelvin Fomba, was honored on the behalf of UDS by the Hossana Children’s Foundation. Hosanna is partnered with City of Joy school, and their mission as an organization is to serve impoverished children.
Here are photos from the recognition ceremony.
And now, we would like to shed a little light on you.
The first five individuals to donate over $75, from now until August 14th, will receive special mention on our site for the month of September as “Honorary Donors.” (For those who have already made contributions of $75 and more, your names will be featured as well!) This is in addition to the the personalized handwritten Thank You letter received from a student for donations:
Your letter will be emailed during the months of September and October.
That’s not all! The 3 highest donations made by the end of this campaign will not only receive acknowledgment on the site, but will also obtain special recognition when the school supplies is delivered to the students in September, in the form of a PSA Video! UDS students will get to express to you through digital media their appreciation for you themselves.
All donations are 100% tax-deductible, and can be gifted according to the following methods:
Donation by PayPal (go to website and click donate button) or Check payable to “Uniting Distant Stars” at:

​    ✩ ​✩ ​✩ ​✩ ​✩ ​✩ ​✩ ​✩​
Please share this email with others to ensure all 700 young students attending City of Joy, Rogma International, and Russ Wood Schools will be given school supplies in September.
Alternatively, feel free to post our attached flyer at your church, coffee shop, or any other place that has a community board!
Many, many thanks,
Anna Bertch
Uniting Distant Stars, National Youth Leader
Email: ​[email protected]