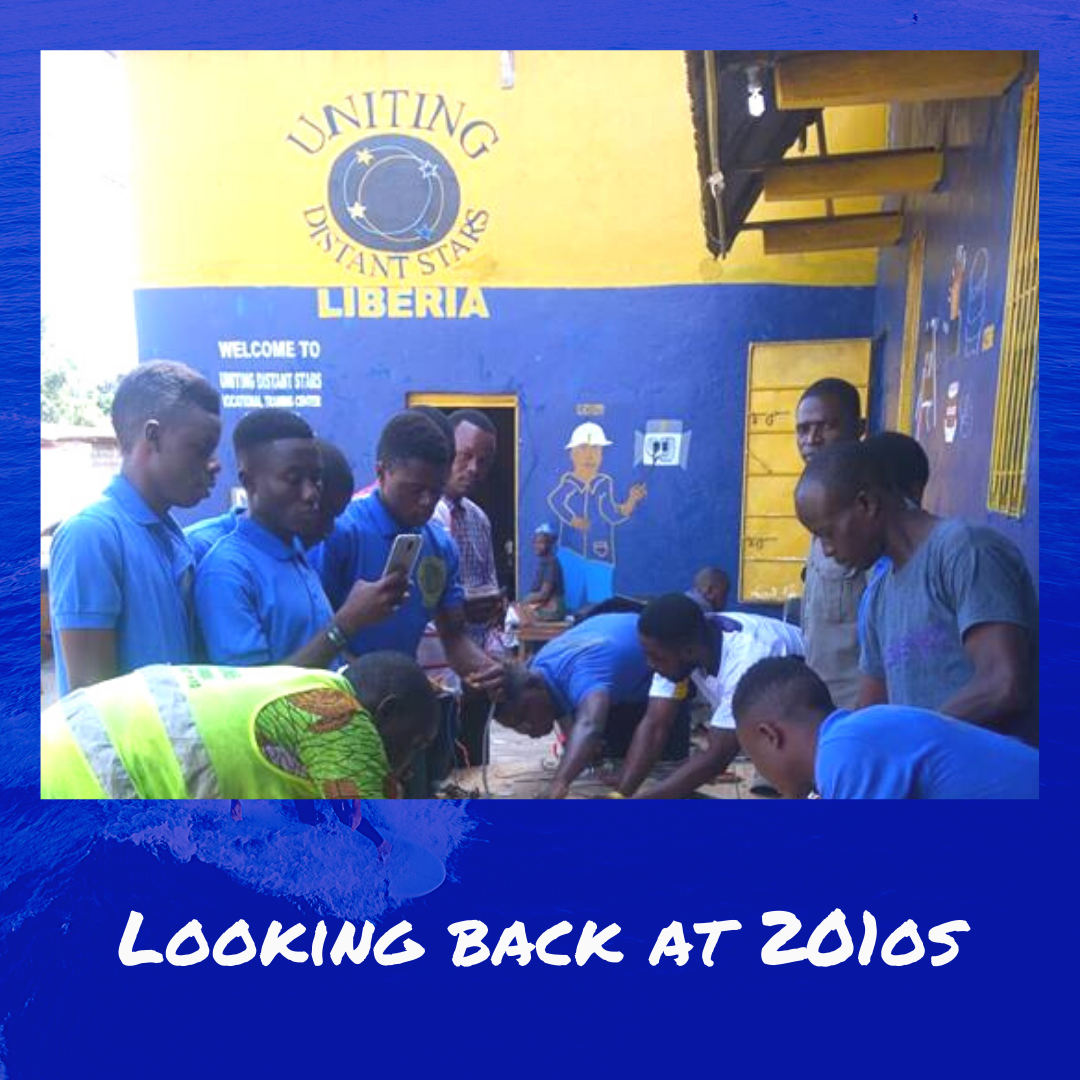 Your continual support over the past decade helped build and grow Uniting Distant Stars into a thriving organization. In fact, you took us from supporting other schools to starting our own. Without a doubt, you deserve a huge CONGRATS for a successful decade! So, let’s review your achievements during the 2010s.

Every journey begins with a single step and a small gesture of kindness. For UDS, it began when Kelvin Fomba (Co-Founder & Director) received two barrels and shared school supplies to a school with over 300 young children. This grew into an annual school supply drive for the next five years.

Additionally, our academic scholarship program kicked off with two students in 2011. A year later, we provided eight scholarships for young people seeking a six-month vocational training program. Six young men completed received a masonry certificate and two young women received a plumbing certificate. From this point on, we continued to give financial assistance ambitious.

After two years of watching our two projects take root, we became a registered Minnesota non-profit in June 2013. At this time, we formed our board and planned our official launch in Liberia in September. With the help of two founding board members, Elijah and Gradieh Wreh, we developed and facilitated a two-day workshop. The “Youth Leadership Workshop on Innovative Creative and Innovative Thinking” introduced Liberian Youth to UDS.

During this workshop held in Monrovia, we challenged the 50 participates to think outside of the box. For instance, they viewed various videos of other African Youth solving a problem with used parts such as generating electricity. Furthermore, Kelvin demonstrated first-hand how this was possible. He first showed them the exhaust manifold he made for the car he drove to the workshop. Next, he modeled the product line (backpacks to rain suits) he made from recycled drinking water sachets.

In close, we probably gained the most from this workshop because we used the concepts to help UDS adapt and grow as an organization.

Our excitement from 2013 turned to great concern in 2014 when the Ebola Crisis took center stage in Liberia, Guinea, and Sierra Leone. As the nation declared a state of emergency and shuttered all schools, our flagship programs came to a halt. Yet, some of the youth did not want to sit idle. So, they reached out and asked Kelvin to provide some skills training.

Although we did not have a school yet, Kelvin transformed his home to a learning center. Also, he received training on how to mitigate risk during the Ebola crisis and implement safety protocols. Then, we started two pilot projects: auto mechanics-drivers education training and sewing durable products with recycled materials. The former worked with 14 youth and later with 4.

As the crisis started to subside in 2015, we launched our “Backpacks for Peace” program. From the results of the 2014 pilot, we recruited 20 youth to learn how to sew recycled drinking water sachets into backpacks. in the course of the next four months, they made over 300 backpacks. Later that year, the backpacks filled with school supplies were giving to young children.

Because of the success of our skills training programs, more youth started to come to our doors and seek our help. At this time, we discovered the youth were our guiding force. We listened to their needs and did what we could to make it possible.

When your mission is youth-focused, be prepared to respond to their requests. That is exactly what we did in 2016. First, they wanted afternoon study classes, and then computer training. Soon, our learning center (Kelvin’s house) overflowed with children and youth. The center offered a library, after school study classes, and auto mechanics, computers, and sewing training.

It became clear that we needed a larger place and the search was on. Kelvin found a former school building within five minutes from his house. With help from one of our sustaining donors, we secured the building in May 2016. The building was in deplorable condition, so Kelvin and his team started to refresh and renovate it into a suitable learning environment by October 2016. Another sustaining donor gave us the funds to install electricity. In just a matter of five months, we held the grand opening of our new center.

Before 2016 ended, we applied for and received our TVET permit to offer professional and technical training. Immediately, our team began recruiting students for vocational training. By February 2017, we officially opened our Vocational Training Center with year-long courses in highly demanded trades.  The students received over 80% hands-on training to apply the skills. Gratefully, this achievement resulted from a small community of global supporters and a highly resourceful Liberian team. Thank you!

Before the new academic school year began in September 2018, we were inundated by pleas from parents in the community. Liberia’s increasing inflation forced many families to affordable schools. Our team stepped up to the challenge and developed a plan to open a tuition-free school. First, they needed the parents to agree to buy the student uniforms made by UDS to be a self-sustaining school. Next, our team pooled their resources to transform the center into a dual-purpose building. Finally, the UDS Academy opened with 350 students.

As we moved into 2019, Liberia’s economic crisis caused businesses to close, and exchange rates and prices to increase. Now more than ever, we needed to find ways to increase our sustainability. Starting in January and June, we installed solar panels to provide 75% of our electrical needs.

In October, Kelvin did major repairs for a person’s vehicle and they gave us a shop (near our center) for 18 months rent-free. In November, we moved our cosmetology department to the shop and opened a hair salon to sell products. All these initiatives are part of our three-year strategic plan.

As we close this decade, we want to celebrate you for joining UDS on this journey. It took a global village to make this all possible. Your generous giving and continued prayers kept us moving forward despite the challenges. We are forever grateful for your service! 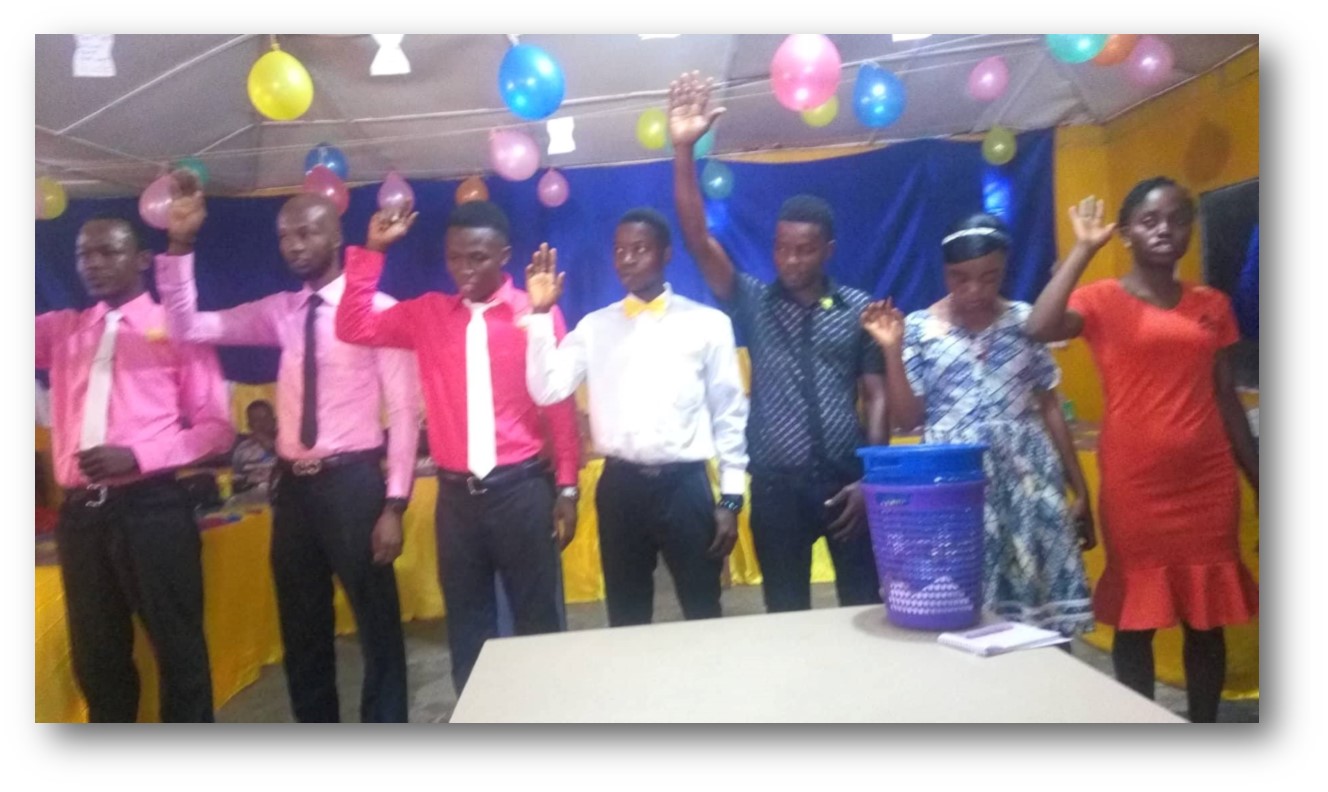 Congrats to our UDS Student Council

When you invest in young people of any nation, you are developing the leaders of tomorrow. Your continued support provides leadership development with our youth. In July, the students elected their student council from a field of interested candidates. They planned an installment program for their new leaders and to celebrate their accomplishments in their given courses.

As they were planning their program, Jackson George (Consul General of the Minnesota Liberian Consulate) contacted us about visiting our center during his trip to Liberia. The original plan was to have him visit on July 30, but this became a holiday for the senatorial election, so the students decided to invite him to their program so he could endorse their leadership and be their guest speaker.

Jackson enjoyed being part of this program and meeting our students. When asked in an email if he had anything to share about his visit he responded, “I just want people to know about the great work you are doing to help the people of Liberia. It was a learning and exciting process for me.” Everyone is very grateful to Jackson for making this a successful and memorable program.

The program started with the students from the various courses showcasing what they have learned during the first third of their term. 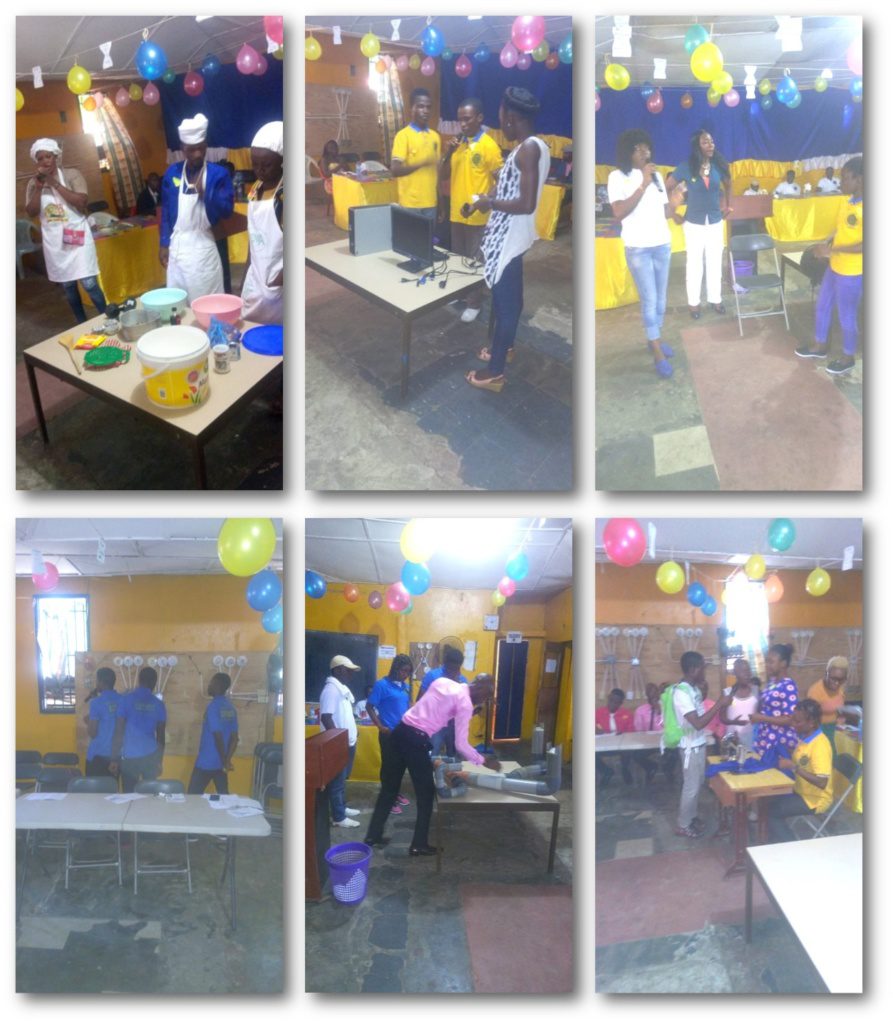 Your students showcasing what they have learned (left to right, top to bottom): Catering, Computer, Cosmetology, Electrician, Plumbing, and Tailoring students

Next, Jackson shared motivational words with the students about the benefits of learning a trade and also how to use social media to share what they are learning and to connect with people. 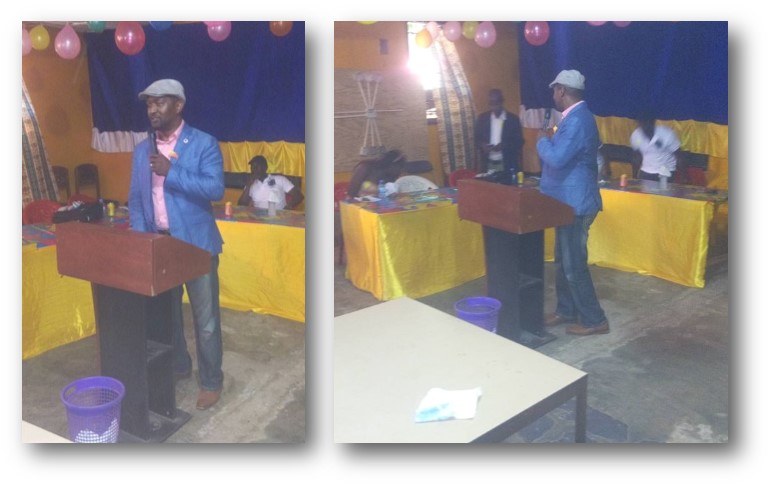 Jackson followed his talk by endorsing our new Student Council who will be serving until they graduate next year. 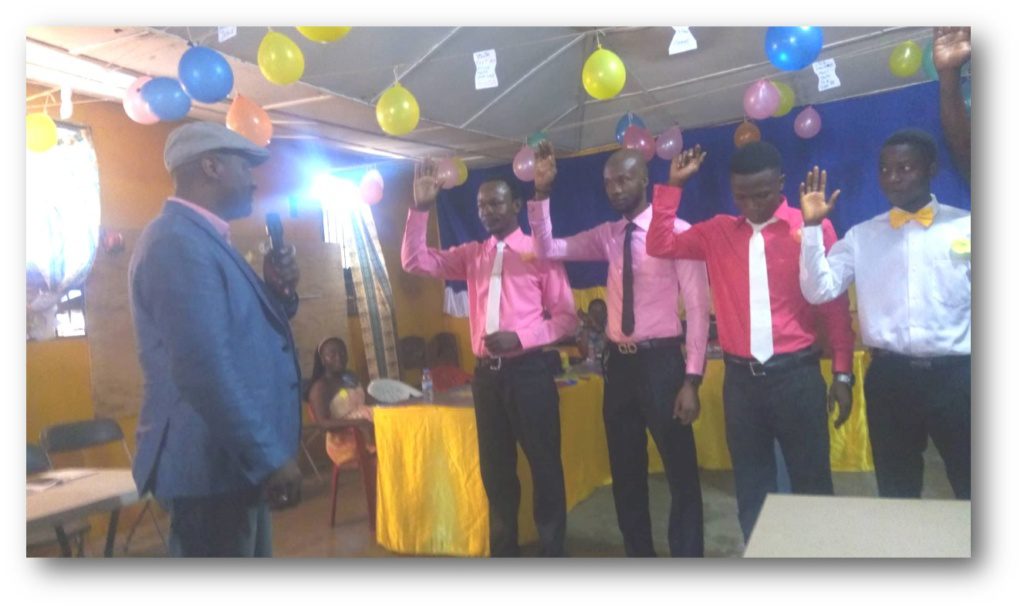 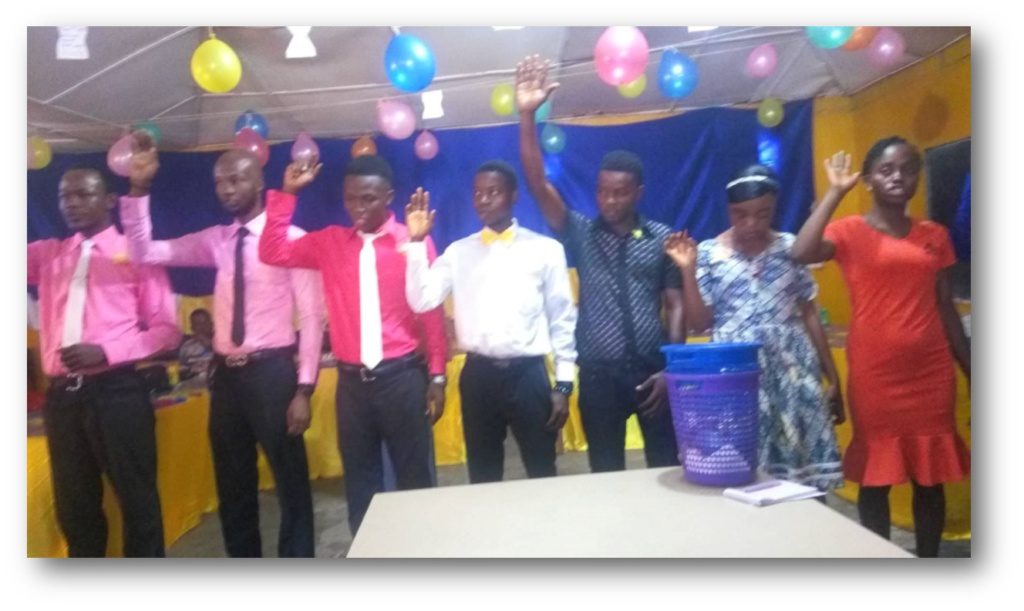 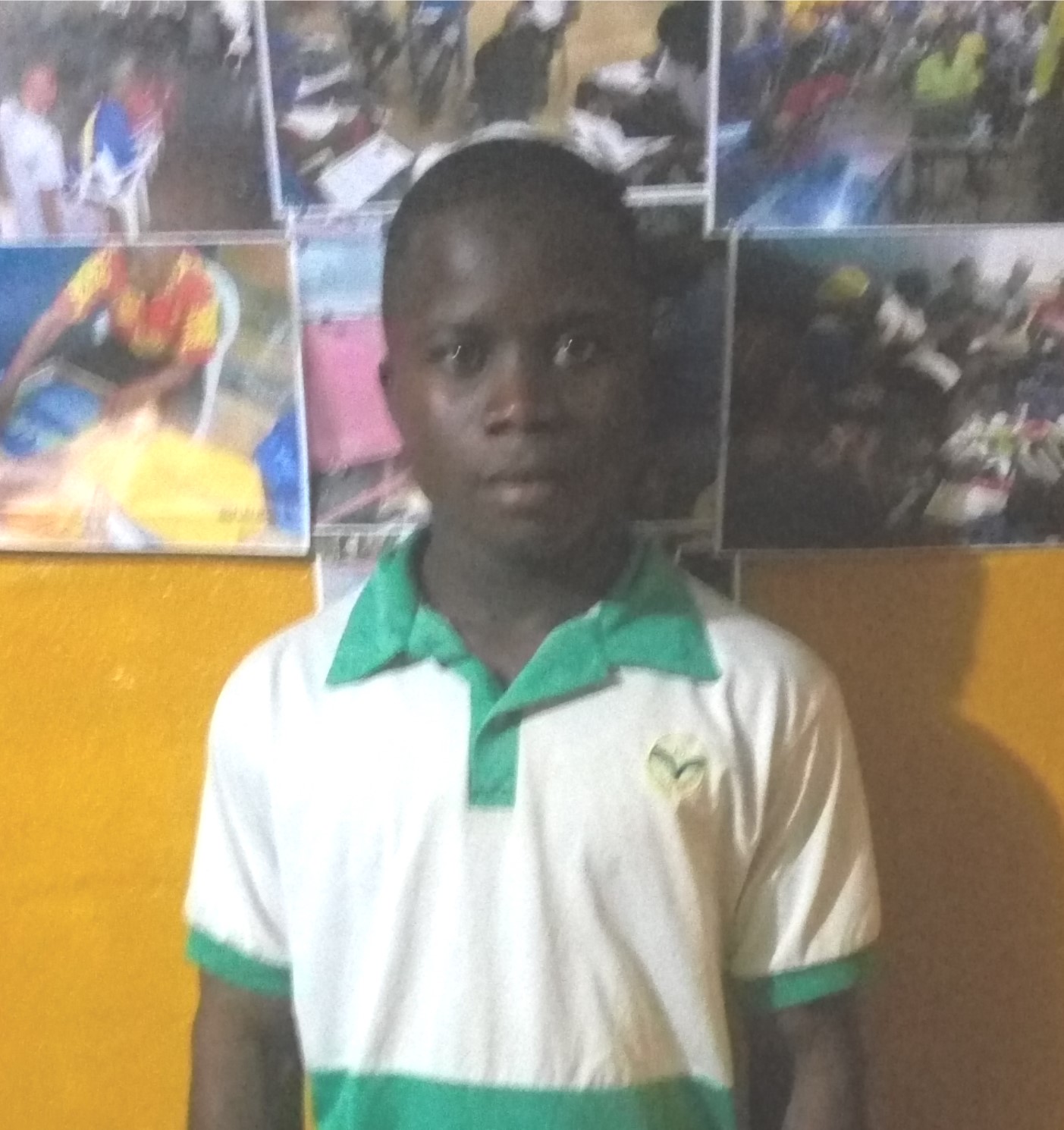 “Education is Better Than Silver & Gold” 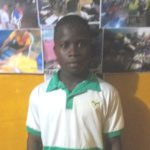 One of our computer students, Enoch Daniel Tarr, from 2016 wrote a song to promote Uniting Distant Stars Vocational Training Center. Enoch is 16 years old and wanted to express his gratitude for our programs through music.

Our creative and talented board member, Anna Bertch, created a music video of Enoch’s song with photos of all our courses. Please enjoy listening to this uplifting song that will get you moving with the music.

Another year will soon fade into the night leaving behind the distant memories of what lifted our spirits or tore at our heartstrings. Sometimes it is important to reflect on these mere shadows of jubilation and tribulation as we prepare for the next 365-day cycle. This is a moment to sort out what has made us stronger and wiser from what will hinder our progress going forward. It is a time to let that inner light shine brightly in embracing our own magnificence. The time is now to appreciate each of our twinkling STARs that illuminates our unique potential and unites our global community.

This post is dedicated to all the selfless STARs who continually share their special gifts to make this a better world. Whether you serve one person or entire community, you are doing something that matters to those you are helping. What you have to offer is something more than what money could ever buy, because when you give of yourself it is priceless to those who are receiving it. While your name or face may not appear in the mainstream news, your act of kindness did have an impact that is worth acknowledging.

A much deserved Thank You to all the Distant STARS who continue to trade in the commodities of goodwill toward others. You have invested some time, energy, strength and resources to provide hope, peace and well-being to those in despair. The returns for your generosity has been smiles, hugs and tears of joy. This earned interest of love will grow exponentially as those you served reinvest their gains of being valued to others in need. There is nothing more beautiful than people living in the spirit of “giving of thyself.”

Uniting Distant Stars would also like to extend our heart-filled Thanks to our Board Members, Supporters, Followers, and Volunteers that helped make our founding year a highly successful one! We look forward to continually develop and grow our organization in 2014 to better serve our young beneficiaries in Liberia, West Africa.

May You All Have a Happy and Healthy New Year!