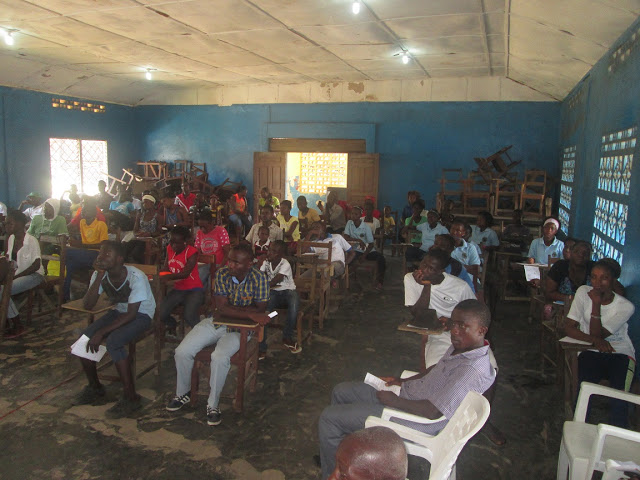 The Divine Town Community in Congo Town invited Uniting Distant Stars (UDS) to hold a Youth Empowerment Workshop on Saturday, April 23, 2016. This day-long event implanted ideas and concepts on how youth can empower themselves and overcome obstacles in their post-Ebola society that increased the number of student dropouts. Additionally, it provided a space for youth to unite and discover ways to take an active role in their community through sports, civic, social and cultural activities.

The workshop provided morning and afternoon sessions with a lunch break in between for 128 participants. Each presenter encouraged young ladies and gentleman to ask questions and offer suggestions during their session. About 70 to 75% of the youth commented that this was their first workshop they had ever attended. The majority of the youth found the information to be relative to their present situation and impressed by the content delivered by each presenter.

Midway through the workshop, Reverend Enders was asked to share his testimony on how he dealt with adversity as a young person. Like so many in the audience, he was forced to drop out of school due to financial reasons as a young boy. When he could finally re-enroll he was much older and had to deal younger students ridiculing him for being in their classroom. Their demeaning remarks did not discourage him from moving forward with his education and he prayed that one day he could go to the United States. Fortunately, that prayer was answered after he graduated from high school. During his time in the U.S., he made another vow to return to Liberia and serve his people. He honored his commitment and came home to start a free school for children in 2012 called African Dream Academy. In 2016, he opened a clinic to provide free healthcare for children up to age 6. Reverend Enders story illustrated how one’s dreams are reachable with determination and effort.

Next up was Kelvin Doe’s TED Talk about how he used discarded electrical devices and repurposed them as batteries, music sets and eventually his own radio station. This young Sierra Leonean received international attention for his inventions and innovations through a YouTube video and became the youngest visiting practitioner to The Massachusetts Institute of Technology (MIT). Kelvin’s inspiring story left our youth awestruck because he demonstrated how he could make his vision into a reality through precise focus and perseverance.

The youth’s reaction to Kelvin Doe’s video was reminiscent to our inaugural Youth Leadership Workshop on Creative and Innovative Thinking in 2013. During this two-day event, we played Kelvin’s video along with other TED Talks of young Africans to highlight their innovative endeavors of using “spare” parts to solve problems. Young Liberians can easily relate to these individuals because they are facing the same challenges of living in poverty and uncertainty of their future. Furthermore, they also saw how their resourcefulness brought positive changes into their life.

As the workshop concluded they asked Kelvin Fomba (UDS Country Director) some probing questions like, “Why have we not heard of UDS?” and “How can they get involved?” Kelvin explained why our presence is not widely known in Liberia because we are a small organization trying to grow gradually to best accommodate the education and skill training needs of youth. He followed with how they can best utilize our current programs such as auto mechanics and driver’s training, afternoon study classes, read books in our library, and sign-up for future computer classes. The youth responded with excitement and eagerness to be part of UDS.

Overall the workshop was a success and helped us learn something about ourselves. While UDS might not be a household name to everyone yet, the Divine Town Community Leadership recognized our efforts in serving young Liberians. The community leaders are grateful for our leadership in providing our youth with resources to improve their education and expand their knowledge. They equally value our partnership in addressing concerns with the growing number out-of-school youth by offering training classes to develop their marketable skills and increase their chances of being contributing members of society.

In closing this post, we are grateful for the efforts of committed individuals who helped organize this workshop to unite youth and open their minds to their own potential. UDS gives special recognition and appreciation to Reverend Samuel Enders, Divine Town Community Leaders, Assembly of God Mission (AGM) School, Mr. Michael A Kharim, Evangelist Godfred Solomon, Pastor Isaac Ndama, Brother Trokon Karsor, Brother Janjay Gabriel, and all our volunteers who made this workshop possible and successful. Thank you!