Uniting Distant Stars promotes a blend of education and innovation with our programs. At the height of the Ebola crisis in 2014, UDS piloted two initiatives from September to December 2014. Both programs were in response to our youth seeking to obtain skills while schools were closed. The first program is our backpacks project where ambitious youth were trained how to transform recycled material into durable goods. The other is our lesser known vocational training program focused on auto mechanics, auto electrician and driver’s education.
UDS Country Director and Co-founder Kelvin S. Fomba spearheaded this program, because he is a seasoned automotive technician and commercial driver working with both light and heavy duty machinery and vehicles. Throughout his career he has taught young apprentices in the field or students in the classroom as an instructor at vocational training institutes.
He quickly heeded the call of 14 young men and started their training with no money since it was not included in the UDS budget. Kelvin used his owns tools and vehicles he inherited from friends who moved to the states or were beyond repair. Kelvin and his students raised about $450 from contracted jobs to service vehicles or generators. This was used to purchase parts and supplies like engine oil, rent welding equipment or pay services of other professionals. Kelvin enlisted some of his fellow technicians to volunteer their expertise when needed.
The student’s first assignment required dropping an engine from a Toyota Camry (Japanese made) with a fuel injection system and standard transmission into the chassis of a Toyota Tercel (U.S. made) that had fuel injectors and automatic transmission. Basically this was putting a square peg into a round hole, because it required several conversions to make it work such as replacing the failed fuel injectors with a carburetor. This is where students learned how to create and weld both an intake and exhaust manifolds, and engine seats to securely place this heavy chunk of metal into the Tercel’s chassis. Our students triumphed with their assignment and now had an operable vehicle for teaching driver’s ed.
The results of this effort were impressive. Out of 14 students trained in one or two of three trades–auto mechanics, auto electrician, and driving, are presently independently working for themselves and supporting their families. The others decided to stay with UDS for continued training. Although they are qualified to start their career, they opted to receive advanced training to land better paying jobs.
Below are photos and stories of some of the UDS graduates from auto mechanic, auto electrician and driver’s education programs. 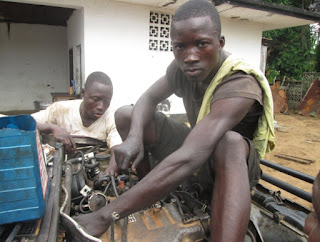 Amara Kamara at the back and Abrahim Kamara at the front during their practical test to overhaul the Honda Passport engine, which they successfully passed.
UDS sponsored both young men in 2013 for six-month auto mechanic training program at Humanity First Ahmadiyya Vocational College. Kelvin was instructing this course at that time. When Liberia shut schools and markets during Ebola’s onslaught in 2014, Amara and Abrahim sought out Kelvin to provide advance training to hone their skills. This additional training paid off, because both are working for themselves today. 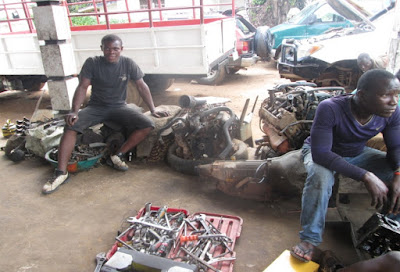 On the left is Ismael Boakai. He is a high school graduate and also was sponsored by UDS to attend Humanity First auto mechanic program in 2013.
In 2014, he took both UDS auto mechanic and driver’s training. Ishmael is very patient and obedient student and this led to him receiving his professional driver’s license for exceeding the requirements. He decided to continue his training to advance his skills as an auto mechanic while waiting to enroll in college if he can get the support to attend.
On right in the same photo above is Lamin Massalay, a graduate and beneficiary of UDS auto mechanic trainingGrand Cape Mount County about 90 minutes from our site and stayed with Kelvin to complete his training. He’s passionate about this work and took his time learning all aspects of this trade. He is now working and supporting himself. 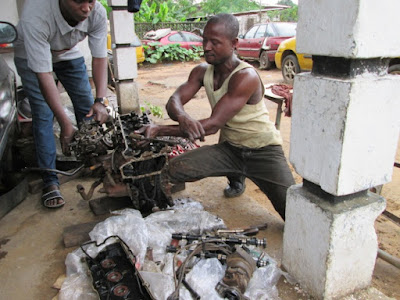 On the right is Mohamed Koromah during his practical test to assemble a Toyota four cylinder engine. He graduated in auto mechanics and driving, and received his professional driver’s license.
He lives in Duala, another suburb of Monrovia. He heard about Kelvin from his older brother when he asked how he could take his training to another level. He worked hard throughout his training and now supports himself as an auto mechanic. 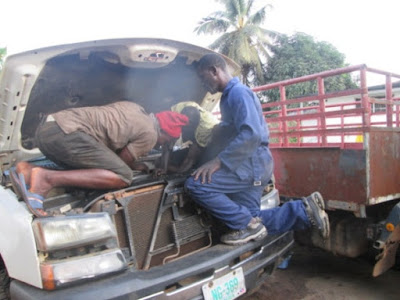 Emmanuel Zayazy and James Kolli in the truck doing their practical test while Kelvin supervises. Emmanuel and James both trained as auto mechanics and drivers. They received their driver’s licenses and now working for themselves. 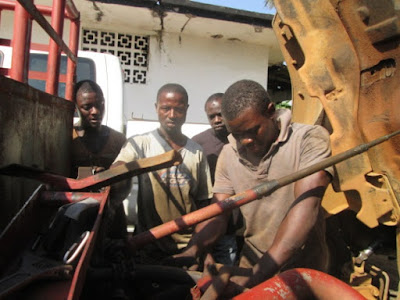 Mohamed Sesay, at the rear right, is receiving training as an auto mechanic and auto electrician. This determined young man graduated from both programs and started his own garage. 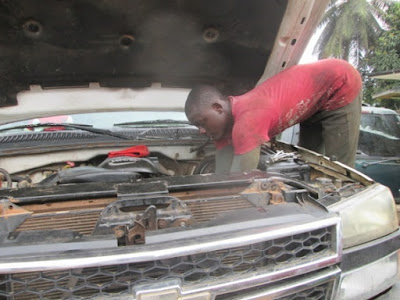 This is Abrahim Massaquoi, a high school dropout, working hard on a Chevy truck. He shared his unfortunate story about how he had no financial support to continue his education after 10th grade, but had a strong desire to learn and acquire skills. After being introduced to UDS, he jumped in and started as a trainee with the backpacks and auto mechanic programs. He appeared in our backpack video and shared why he was seeking this training.
From his steadfast dedication to learning both trades, Abrahim received a scholarship to return to school as a 11th grader in February 2015. He is now a high school senior and will be graduating next year (2016).
Kelvin continues to train UDS students and provides practical experience for his students at a vocational training center where he teaches part-time. Most of his students are male, but has one female student who is a rising star as an auto mechanic. 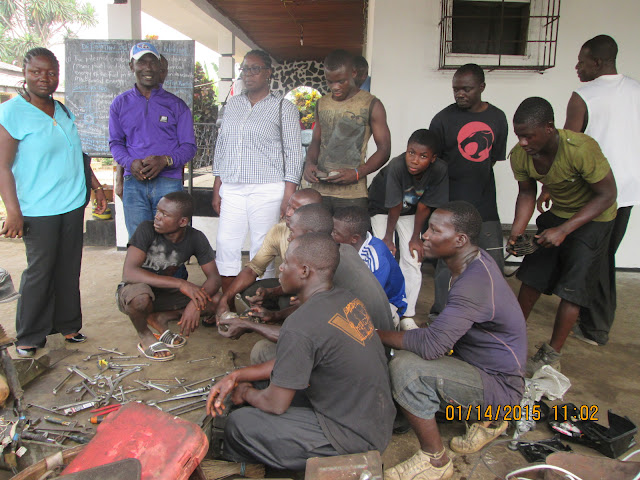 UDS plans to start a vocational training institute in the future that teaches both perfect and imperfect world application of various trades. Our programs have shown youth how to be innovative in transforming unlikely resources into workable vehicles or usable products like our backpacks. Both projects established their core curriculum and learning objectives in 2014. Our next step is to scale our programs by locating a suitable space and searching for potential funders.
While Ebola devastated Liberia, it did not deter its young people from gaining knowledge and experience to improve their lives. UDS heard their pleas in 2014 and provided vocational training they needed to become self-sufficient.