My Recent Trip to Liberia – Part 2

Before I continue on with the recap of my recent trip to Liberia, I want to Thank all of you who provided comments about last week’s blog post! Your feedback is very much appreciated and gave me the incentive to keep blogging! Now let’s get back to business…

Well, the main purpose of this trip was the healing and reconciliation conference. While Liberia has maintained peace for over eight years, the healing has just begun and it will take more than this two-week trip to mend the wounds that were inflicted in 14 years of war.

Granted there have been attempts to bring this nation together since the war ended in 2003. For example in 2005, the Truth and Reconciliation Commission (TRC) was established, which was similar to the ones in Rwanda and South Africa. The purpose of these commissions is to gather the stories of the victims and give them a chance to face the individuals who either caused them great harm, and/or killed someone they loved. Usually, these proceedings will give amnesty to those who admit to the atrocities they have committed. However, there are exceptions for those deemed the worse perpetrators, which they could be tried for crimes against humanity at an international war crimes tribunal.

For about four years, the TRC worked tirelessly on interviewing countless people in Liberia and the Diaspora in the U.S. They submitted their final report in July 2009 with their findings and recommendations. I happened to be in Liberia when the news broke about this report. From what I observed, there was cause for confusion, anger and in some cases fear. Majority of the Liberian people had no access to the entire report, so they were limited to what was being disseminated through the media. They got to hear some of the disturbing finding such as the list of the most notorious perpetrators and the heinous acts they committed. Also, it listed individuals (included President Ellen Johnson-Sirleaf) who should be banned from running for any political office for a 30-year period, and people/businesses (included Firestone Corporation) that are still being investigated for economic crimes that sustained the war.

Up to now, none of the recommendations have been implemented. In fact, no one in Liberia has faced any criminal charges for the atrocities committed in this 14-year civil war that included torture, rape, kidnapping, dismembering, killing, forced conscription of child soldiers, and other egregious acts. This has allowed certain former war lords and key perpetrators to freely run for all levels of political office including president, which some were elected in the 2005 elections. Some of you might be aware that Former President Charles Taylor is currently on trial at the Hague, but this is for alleged war crimes in the neighboring country of Sierra Leone…clearly not Liberia.

It would seem our arrival to Liberia, shortly after the results were announced from the October 11 election, was nothing more than miraculous. As a result, we would be on the ground for the November 8 run off presidential election since no candidate received more than 50% of the votes. This seemed like a perfect time to talk about healing and reconciliation as the Liberian people prayed and hoped for a peaceful outcome to their second post-war election cycle.

We spent our first week in Kakata, a thriving small city in Margibi County that is located about 15 to 20 minutes from the Firestone Rubber Plantation. It is the home of prominent education institutions such as BWI (mentioned in last week’s blog) and Cuttington University. It is also the training center for the newly recruited Peace Corp volunteers.

We were warmly received by the people of Kakata from the first night we arrived. They had been eagerly waiting our arrival for the past couple months. Their enthusiasm made our first week in Liberia a joyous time.

We officially started the conference on Wednesday, November 2, which was held at the Kakata’s City Hall. We offered a variety of daily workshops in the morning and afternoon. Then during the evenings the revival meetings were held, which included a fundraiser for the people of Kakata to partner with the LMA on completing some important initiatives. These projects included a public library, microphones for radio stations, grating primary dirt roads, and a motor bike for the police station. 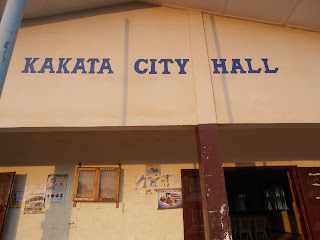 During our stay, we were graciously hosted by the Kakata’s Police Chief Douwe Goldoe and her staff. Chief Goldoe had the opportunity to visit Minnesota this past year and was able to participate in some training sessions with the St. Paul police department. She is amazing woman with a strong spirit to serve her nation. She went out of her way to ensure that we were well taken care of during our stay in Kakata. Mid-week she invited us to the police station where she gave us a formal greeting. Click here to watch a short video clip of her introducing some of her staff during our welcome visit. Right after this meeting, she took us to her place for amazing lunch that included Togbogee and Rice plus some fresh, sweet pineapple–never tasted anything like it in Minnesota. 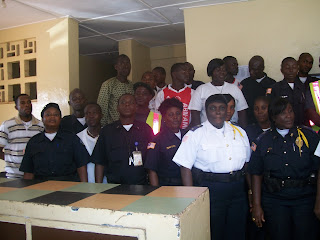 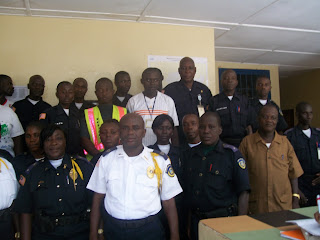 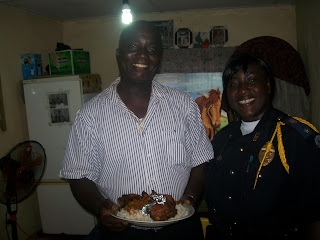 One of my teammates Rev. Zephaniah Kauffey standing by
Chief Goldoe in her kitchen. (taken by Pastor Destaye Crawford)

Going back to the conferences, we were successful in engaging the people of Kakata. We offered a variety of presentations that focused on forgiveness, praise and worship, church leadership, healing and reconciliation, and much more. We had originally planned for four days of conferences, but changed it to three. Each day, the first presentation was for the entire audience and then we offered two during the three breakout sessions. I delivered my presentation “Transforming a Shared Suffering into a Shared Healing: on the first day during the second session. I will dedicate one of my future posts on showing my PowerPoint presentation and briefly explaining each slide. 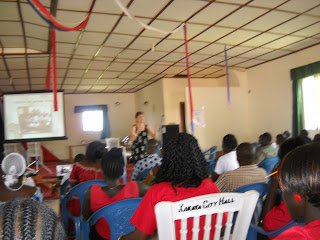 Here I am presenting in Kakata wearing a dress given to me
from one of my teammates, Pastor Destaye Crawford!

The nightly revival meetings were very impressive. Liberians know how to praise and worship by singing and dancing with great joy! We watched in amazement as the crowd grew each night– from Wednesday to Saturday–to where it was standing room only. Also, the fundraising was a huge success, because each night the people exceeded that day’s goal. I believe the first night the goal was to raise $10,000 (Liberian dollars) and the final total was $15,000 LD. This amount in USD is about $214, which may seem like a nothing to us. However, for people who live on meager budgets, this amount was quite amazing. Their effort supports something I have learned from my experiences in Liberia is that ‘those with the least have the most to give. ‘

Here are some pictures from the nightly revival meetings: 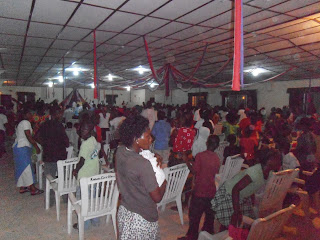 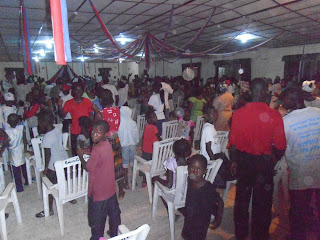 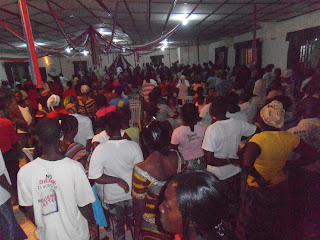 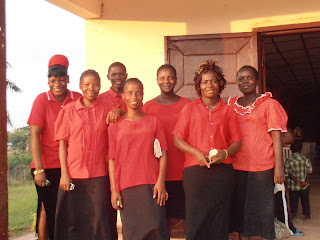 These are the ushers for the nightly revival meetings 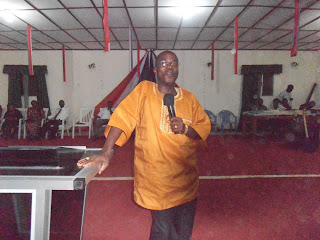 Dr. Rev. Josef Howard, LMA’s Executive Director was the team leader.
He was very instrumental in ensuring our teams success. 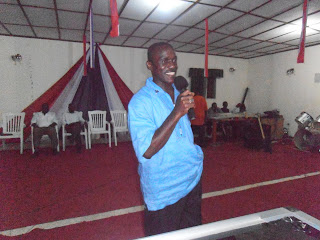 Another plus about our trip was the food! While in Kakata a few of the local pastor wives cooked our daily meals. We usually ate our breakfast at the guest house before heading to the City Hall. We broke for lunch at 1PM, right after our last breakout session and ate at the conference site. I must say, these women did an outstanding job in preparing our Liberian cuisine. I got to enjoy some of my favorites such as Jollof Rice, Potato Greens, Check Rice and Gravy, Cassava Leaf and many more. I should mention that the LMA provided a free breakfast and lunch for all attendees, which probably gave many the opportunity to have more than one meal a day.

Here are pictures of us enjoying some Potato Greens and Rice, which these photos were taken from my teammate Pastor Destaye Crawford’s camera (she is from Ethiopia and now a U.S. citizen). 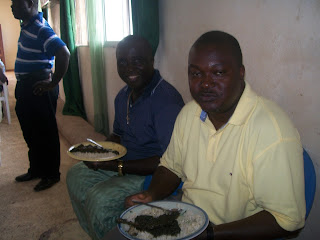 More of my teammates (from left to right)
Rev. Zephaniah Kauffey and Rev. Daniel Goba 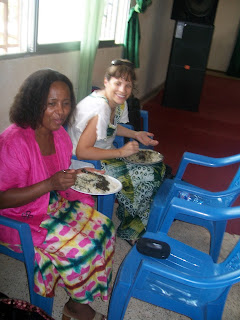 Rev. Destaye Crawford and me (wearing a borrowed
Africa dress from another teammate Naomi Hard) 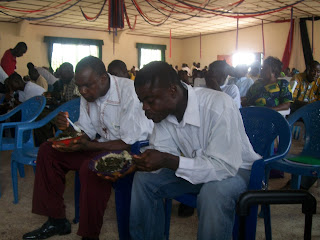 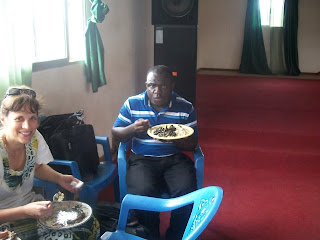 Me and Rev. Alexander Collins 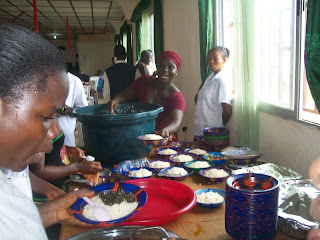 Some of the women who cooked and served the food 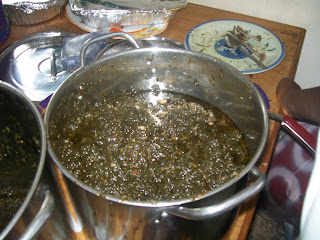 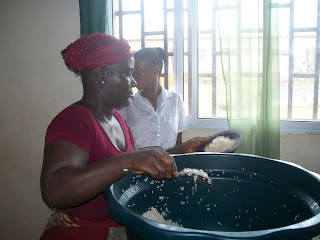 Serving the rice, which is a major staple in Liberians diet 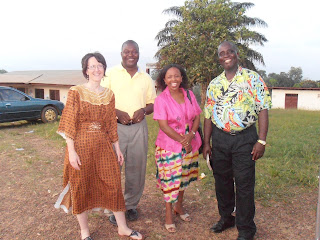 Enjoying a break (from left to right): Naomi Hard (our teams RN),
Rev. Goba, Rev. Crawford, and Ref. Kaffey.
Now one of my favorite things to do while in Liberia is interacting with the young people. I came prepared with some beach balls to give out to kids that I came in contact with. I tried at first to blow these up for them, but soon discovered their young lungs were much better for the task. Below are two young boys who were quick to inflate their new balls and gave a victory smile when they were done. 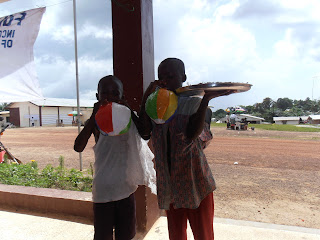 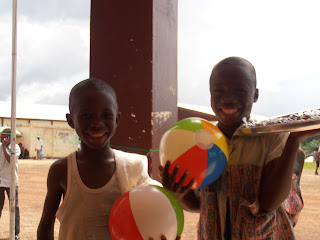 For the most part, the children of Liberia love getting their picture or video taken. With the advent of the digital camera, this has made it more fun since the kids are eager to see their picture or watch their video. I recently published one of my videos on YouTube where some of the local children gathered together to wave and smile at my captive audience. Please click here to watch these beautiful children say hello to you!
I had posted this video on my Facebook page on November 23 with this comment: “Life is so precious and the children of Liberia always remind me of this fact! Tomorrow is Thanksgiving here in the U.S. So, as you watch this video and see these beautiful smiling faces waving at you, please realize that these children probably have one meal a day, living in a home or hut with no bathroom, and too poor to attend school. These children experience more misery that most of us, and yet they still can smile and have hope!”
I believe this is a good place to end and we will continue next week about the second leg of this trip. Until then, I wish you all good health, warmth and happy times!