Yesterday, a woman representing “Women Against Crime” visited my neighborhood soliciting funds to keep airing the late night radio show “Crime Watch” on Truth FM. This show was being sponsored by the UNDP (United Nations Development Programme) whose commitment will end in September. However, instead of letting this important conduit for reporting crime disappear from the airwaves, Liberian Woman have taken on this noble mission to “Keep the Crime Watch Live”.
This radio show is Liberia’s 911 Call for Help emergency response system. According to an online article “Cell phones Transforming Liberia“, the main objective of Crime Watch is to alert “police of on the spot night time crime scenes through the use of cell phones.” This show also informs emergency response teams of patients needing urgent medical attention from cell phone callers. Many lives have been saved by this collaboration of this late night radio show and its “huge listening audience” call in reports This program alerts the proper authorities of medical emergencies who than deploy ambulances to transport patients to the nearest medical center.

The Crime Watch radio show also serves as Liberia’s Amber Alert for children who have been abducted. This was the case recently when a child was mysteriously kidnapped on August 18 at the Special Project School Community in Gardnersville (suburb of Monrovia). It is believed that the child was kidnapped by an armed robber who fled to a nearby swamp. The authorities were alerted when a man, claiming to be hiding in his bathroom at the time of the abduction, called into Truth FM’s Crime Watch radio show to report the crime. The Emergency Response Unit of the Liberia National Police responded to the call, but sadly this child remains missing. In meantime, a human rights lawyer Cllr. Dempster Brown has been advocating for this child by calling on the newly appointed “Justice Minister, Christiana Tarr, to ensure that the reported disappearance is thoroughly investigated.”

In appreciating the efforts of these concerned women of Liberia, I offered to write this post in supporting their campaign to “Keep the Crime Watch Live.” Call TruthFM information line at +231 (6) 777 961 to learn more about the program or to report a crime. More information will be coming soon about Women Against Crime. 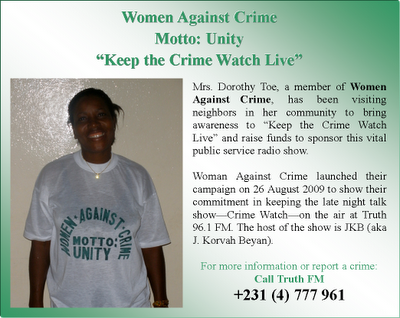