On August 24, Liberia celebrated its Flag Day, and many businesses and government agencies closed to recognize this national holiday. This was a day for Liberians to display proudly their flag either on their house or car similar to how U.S. citizens honor their Flag Day on June 14. The flags of these two countries are a clear indicator in how Liberia and the United States of America are connected.
Just by looking at these two flags one can quickly notice how they are similar to one another. They both share the same color theme that for the U.S. Flag is symbolic: Red represents Hardiness and Valor, White represents Purity and Innocence, and Blue represents Vigilance, Perseverance and Justice (The History of American Flag). They both, however, differ on the number of stars and stripes. The single star on the Liberia Flag represents one nation–Lone Star– whereas the 50 stars on the U.S. Flag represents the 50 states that joined one nation. The 11 stripes on the Liberia Flag represents the 11 signers of their Declaration of Independence whereas the 13 stripes on the U.S. Flag represents the first 13 colonies that started this nation (The History of American Flag and Hyman). 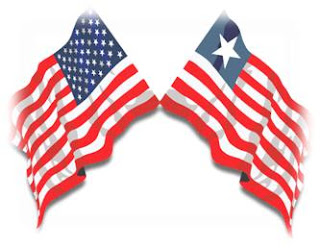 These two nations also share a common reason in why they declared independence that involves Great Britain and taxation. Additionally, these two nations declared their independence in the same month though separated by 71 years and 22 days.
The 13 original colonies of British North America were governed and protected by Great Britain until a stalemate was reached over the argument of taxation. In 1765, two years after the French and Indian War, the British parliament decided to redress the massive war debts they accrued during this conflict also known as the Seven Years’ War. The colonists saw this as an act of tyranny–taxation without representation–and also as unconstitutional, because the British Constitution was not framed and adopted at specific time. Instead it was amassed by laws, judicial decisions, customs and other constitutional type documents such as the Magna Carta. Therefore, in 1775 after ten years of arguments the colonist began their Revolutionary War against Great Britain leading to the adoption of their Declaration of Independence on July 4, 1776 (The Constitution, 6-8).
Liberia was founded in 1822 as a colony of the United States of America, and for over 20 years it was governed by the American Colonization Society (ACS). However, this new colony struggled to exist since the ACS was financially constrained, so Liberia relied on its revenue from trading with foreign markets. In 1938, Liberia became a commonwealth and adopted a new constitution to govern all the merged settlements. This commonwealth for the next eight years received most of its revenue from charging custom duties on indigenous traders and British merchants. However, this angered the British government and they refused to recognize Liberia’s sovereignty for levying taxes, because this colony was governed by the ACS, a private organization. Therefore, ensuring their right for survival Liberia adopted and signed their Declaration of Independence on July 26, 1847. Thus giving them full taxing authority by which Britain was the first to recognize this new country (History of Liberia).
During the 20th and 21st centuries both countries experienced changes in their landscapes. The U.S. expanded westward from its 13 colonies to 50 states when Hawaii was last admitted in 1959 (Hawaii). Liberia, on the other hand, had some border disputes with the neighboring British and French Colonies until 1892 when its boundaries were officially established (Liberia). Additionally, Liberia as colony was first divided into three provinces–Western, Central and Eastern; however, these eventually split into counties with the first five being created in 1800’s and eight more in the 1900’s. These thirteen counties remained the primary administrative divisions until two counties split creating two new ones in 2000 and 2001 respectively (Liberia-Wikipedia).
This post closes with an activity–Discover the 15 Counties of Liberia–that can be shared with the family by clicking the link below and printing it. This activity includes Word Search and Crossword puzzles, and blank outlined map for locating the counties that can also be colored by the kids. Some of you may find this activity simple while others may find it a challenge. Those of you who find this difficult, the internet is the best resource to search for the answers. The answers will be posted on September 5, 2009. Good Luck and Have Fun!
Discover the 15 Counties of Liberia (LiberiaCounties.pdf)

The Constitution of the United States with the Declaration of Independence and the Articles of the Confederation. Introduction by R. B. Bernstein. Barnes and Noble Inc., 2002.